A Long Road Ahead for a Systematic European NPL Approach

While Europe was united in the response to the ABS crisis back in 2008, much needs to be done to ensure a systematic European approach for non-performing loans (NPLs).

On 23 September 2020 new disclosure requirements under the Securitisation Regulation (EU) 2017/2402 entered into force for public and private Non-Performing Exposure (NPE) securitisations. For this purpose, the reporting entities need to disclose detailed information on the NPEs using the dedicated NPE add-on template.

Leading up to this addendum, the EC organised a series of workshops and corresponding action plans over the years. In addition, the European Central Bank (ECB) proposed a number of solutions in the Financial Stability Reports and the European Banking Authority (EBA) invested significant time and effort into the publication of two versions of proposed NPL reporting templates and dictionaries for whole loan portfolios (1.0 and most recently 1.1 as of September 2018). At the same time, the industry has been actively working to reduce the NPL burden in an orderly manner across jurisdictions with country-specific solutions.

The World Bank produces a very detailed report on the “resolving insolvency” regimes. See the exhibit below for Europe. 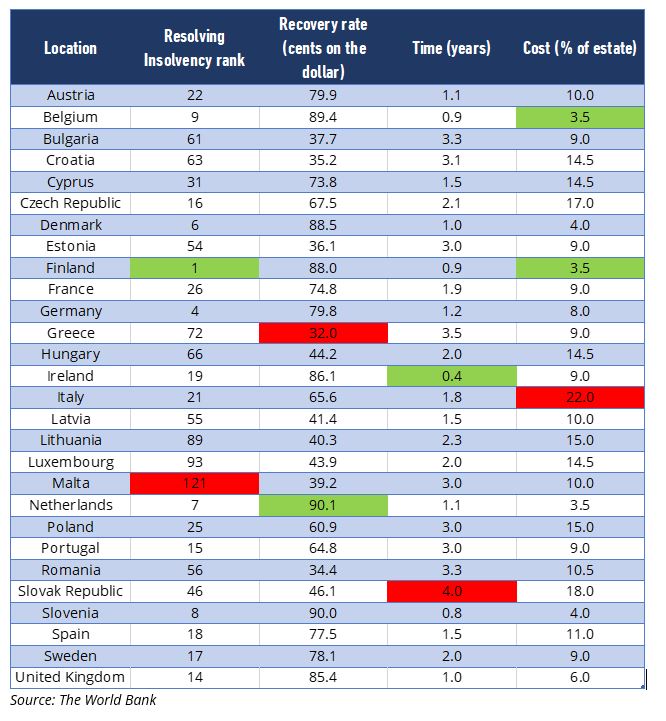 Successful initiatives are currently underway together with a new report from the EC expected in mid-December 2020.

Below we try to summarise the various initiatives:

Below we provide some high-level ideas that could be considered as a way forward for NPLs.

The way forward is not easy but if Hannibal managed to cross the Alps without roads accompanied by elephants in 218 BC, we can surely plow a new path for NPLs in 2021.