As of Q2 2022, the outstanding number of loans in our database totalled 38.9 million, with a value of almost €0.8 trillion from 14 European countries. 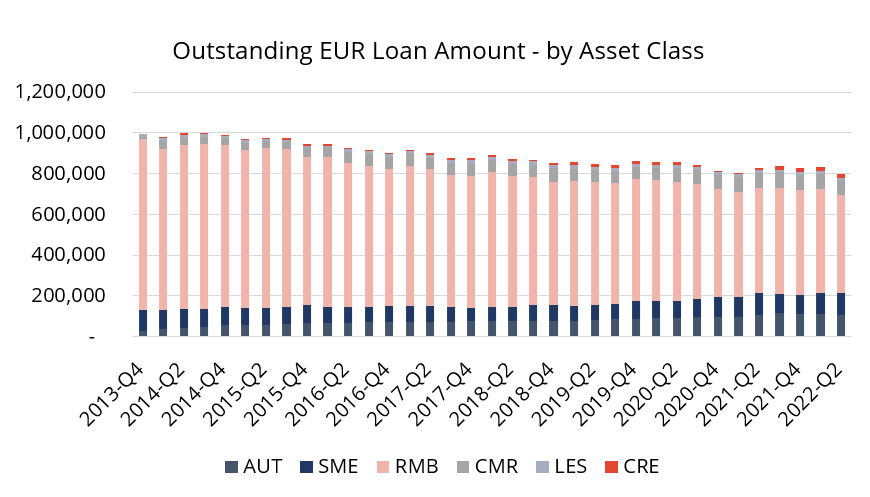 The values for these loan amounts are adjusted for errors (dummy values, decimal points inconsistencies) observed in the oldest uploads. Currencies have been converted when loan amounts were reported in a currency other than the Euro.

Please note that securitisation does not matter equally in all countries and to all lenders. While mortgage securitisations are found in most countries, not all countries are equally represented. This is also the case with other asset classes. For instance, Germany accounts for 51% of all auto loan amounts, and Italy represents a substantial share of European consumer loans (46%) and leases (68%).

Given that some data is uploaded either monthly or quarterly, the datasets upon which this report is based include the last available LLD for a given deal as of the end of a natural quarter (March, June, September, December).

The uploads received before the end of October 2022 to our ECB, ESMA, and FCA databases are listed in the tabs “Deal Inventory” and “Underlying Data”. Some deals are uploaded simultaneously to several of our databases (i.e. ECB and ESMA, or ESMA and FCA). In order ensure data was not double counted when data was provided from several sources for the same period, we prioritised data from the ECB database, or from the ESMA database when no ECB format data was available. When data was not available in the ECB nor in the ESMA databases, we completed it with data from the FCA. This applies to the statistics displayed in the amounts, loans, and borrowers tabs.

Users can access the data on the ABS platform with European DataWarehouse’s cloud-based solutions EDITOR and EDITOR Insights, or a standard API interface, and analyse and compare underlying portfolios.

Data used in this research is uploaded by ABS issuers to comply with European Securities and Markets Authority (ESMA) and European Central Bank (ECB) regulatory requirements for asset-backed securitisation transactions, as well as Bank of England loan level data requirements.

For custom research reports or information on how to access the loan-level data yourself, please contact us at enquiries@eurodw.eu. Furthermore, if you have conducted research with our ABS data and would like us to feature it, please email us.